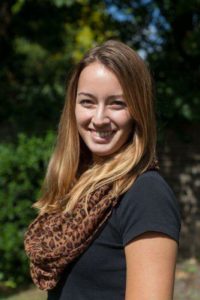 What year did you graduate from RCS? 2010

Which grades did you attend at RCS? Kindergarten – Grade 12

Were you a part of any clubs, societies or teams at RCS?
I was on the Student Council for three years, first as Secretary, then as Vice President for two years.

What was your next step after graduating from RCS?
I started in the fall of 2013 at Emmanuel Bible College, in the Bachelor of Religious Education program, majoring in Counselling.

How did you find the transition from RCS to your next phase of life?
Because I didn’t actually transition out of school, it didn’t feel jarring, especially since I continued my education at a Christian institution. I came into my undergraduate program with a strong work ethic, and I knew how to study well. Both were characteristics that were instilled in me while at RCS, so the workload and expectations, though challenging at times, were manageable. Overall, I really do feel that my RCS education was invaluable in laying a foundation for my future studies. It was there also that a seed was planted in me to see the presence of God in everything, be it in the way a math equation makes sense, or to trace the providence of God in history, or the beauty of a well-written poem. I value that lesson even today.

The two things I didn’t feel totally prepared for as I transitioned out are slightly harder to put into words. First, when I began at my Christian undergraduate school, it was expected that students would support each other by praying together. This only increased during my time at seminary (see below). While I do believe that instilling the value of praying with one another begins in the home, I didn’t feel encouraged to do so at RCS, and I think that would have been helpful. Perhaps that’s changed now, and if so, I’m glad.

Secondly, I didn’t feel particularly equipped to handle the reality that different Christians from different backgrounds have different views on certain subjects. To be clear, I think we were taught that differences existed, and we were certainly taught that the Reformed way of understanding is the most biblically accurate, but I think that left a lot of us thinking that other views would be easily dismantled, and that it’d be obvious as to why the Free Reformed way was the best way. But as I left the bubble of RCS, it became clearer that other (though not all!!) Christians had very good reasons for their different beliefs, and they believed so with conviction and humility before the Word of God! It suddenly hard to see these genuine Christians as the ‘bad guys’ or as views we should run away from.

I praise God for those experiences, because they certainly have forced me to think through why I believe what I believe about things like Sabbath keeping, baptism, engagement with things like popular music, etc, and it’s solely God’s grace that I hope and pray has kept me in alignment with His Word. However, my fear is that kids leave RCS, encounter Christians who believe just as firmly as they do about the way they live out their faith, and then they get swayed or pulled in potentially concerning directions because they haven’t thought through how to deal with that.

That’s probably a much longer answer then you were bargaining for, and I wouldn’t expect you to publish the last few paragraphs. But I thought I’d share those thoughts since the opportunity landed in my inbox 🙂

What is your highest degree of education? Where did you receive this degree and from what institution?
Master of Arts in Counseling from Westminster Theological Seminary in Philadelphia, Pennsylvania.

What is your current occupation?
It’s slightly complicated! Below are my various roles:

Where do you currently live? Cambridge, England!

Are you married? No.

What feedback or suggestions do you have for the teachers working with our graduating seniors?
Give them space to talk about the more subjective things: their fears going forward, the grief of separating from classmates, their hopes, their goals. And not just along the lines of “What are your goals?,” but why do they have those goals?

If they’re not sure of what they want to do, help them think through that. Help them think about the principles of wisdom, rather than forcing them to select a job or career. e.g. If you don’t know what you want to do, let’s start thinking about what God deems as wise for your situation. Is it wise for you to sit at home? No, for _____ reasons. If that’s the case, how might you use your time? Would it be wise for you to make money? Why? What are you going to do with your money? Etc. Etc. I could go on, and I realize teachers don’t have the time (maybe not the energy either!) to counsel students more in depth, but I think the emotional support is needed just as much as the practical help of applying to different schools, etc.

Do you have a memory or comment you would like to share about a favourite teacher, or someone that influenced you the most at RCS?
No specific memories leap out, but Mr. Westerink, Sarah Vlietstra, Jana Vanderzwaag, and Mrs. Lisa VanDyk were definitely influential on me. Rather than a specific memory, I think they just showed that they actually cared about me as a person. They wanted to know how I w as doing, they were real about their own struggles and failures, and they didn’t try to be perfect. I suppose what I’m saying is that they were approachable. I try to emulate the same thing for my counselees and interns even now.

Do you feel connected to RCS? Please provide a reason for your response.
Not hugely at the moment, but that’s not a fault of RCS. Having lived the last three years in Philadelphia, and now living in England, it’s not like I can attend the fundraisers or events like I used to. However, my nieces and nephew attend now, and it’s fun to talk to them about how they’re liking “Auntie Manda’s old school,” so in that way I feel a teensy bit connected.

From your perspective, what is the value of an RCS education?
I’ve touched on some of this already, but first and foremost, I think the value lies in its ability to help students think biblically about every subject. I’m sure there are ways to improve that, but I think that students leaving the school at the end of the day having learned more about God through the subjects they’re studying is incredible. And it shows – I’ve been told on multiple occasions both during my undergrad and at seminary that I must have had a strong Christian education.

Secondly, the work/study ethic is pretty invaluable. You’re asked to do a lot, and you’re expected to do your best. That mimics the mindset of a lot of quality institutions out there, so students going on for further education are well- prepared. Students who head into the trades or perhaps marry and have children soon after can transfer those ethics into their workplace or into the way they raise their children.

I also think the community aspect of RCS is HUGE. All the parent-driven fundraising – the reality that your education depends on other people’s commitment to your education – is really felt, or at least it was for me. I think that instills the importance of commitment, and the value of supporting something you believe in, into people. The lack of people committing to support things has been a real problem I’ve seen in my time outside of the RCS circle, so I’m particularly thankful for that. Most other schools (or even churches) are not raising thousands of dollars from a fish fry…

What is your favourite memory from RCS?
Hmmm….this is tough, as there’s a lot to choose from! I’d have to go with either the time when Esther Roth (nee Vandenberg) and I decided to ‘sunbathe’ (fully-clothed of course!!) under the lights in the high school hallway during a dark winter day.  Mr. Westerink came around the corner, asked what we were doing in a very nonchalant way, calmly stepped over us, and carried on his way, acting for the world as if his students normally behaved like that.

The other memory is from graduating. As I gave my valedictorian address, I remember looking out over the sea of faces and recognizing so many of them. I felt like we, as a class, were being sent out by a multitude of people, each one cheering us on, and because of that, we could head into the future with confidence. I think it reminded me of Hebrews 12:1. Afterwards, in the receiving line, that feeling was only confirmed as many people expressed interest and joy in what I was going to go study. It was encouraging and exciting to feel like so many people were backing us up.

We are aware of the current concerns surrounding COVID-19. As an Edvance affiliated school, we are in contact with them regarding any necessary precautions and updates. We are also closely following the Public Health Agency of Canada (PHAC) guidelines at this time. In all these things, we continue to rely on the protection of our unsleeping guardian (Psalm 121). Dismiss